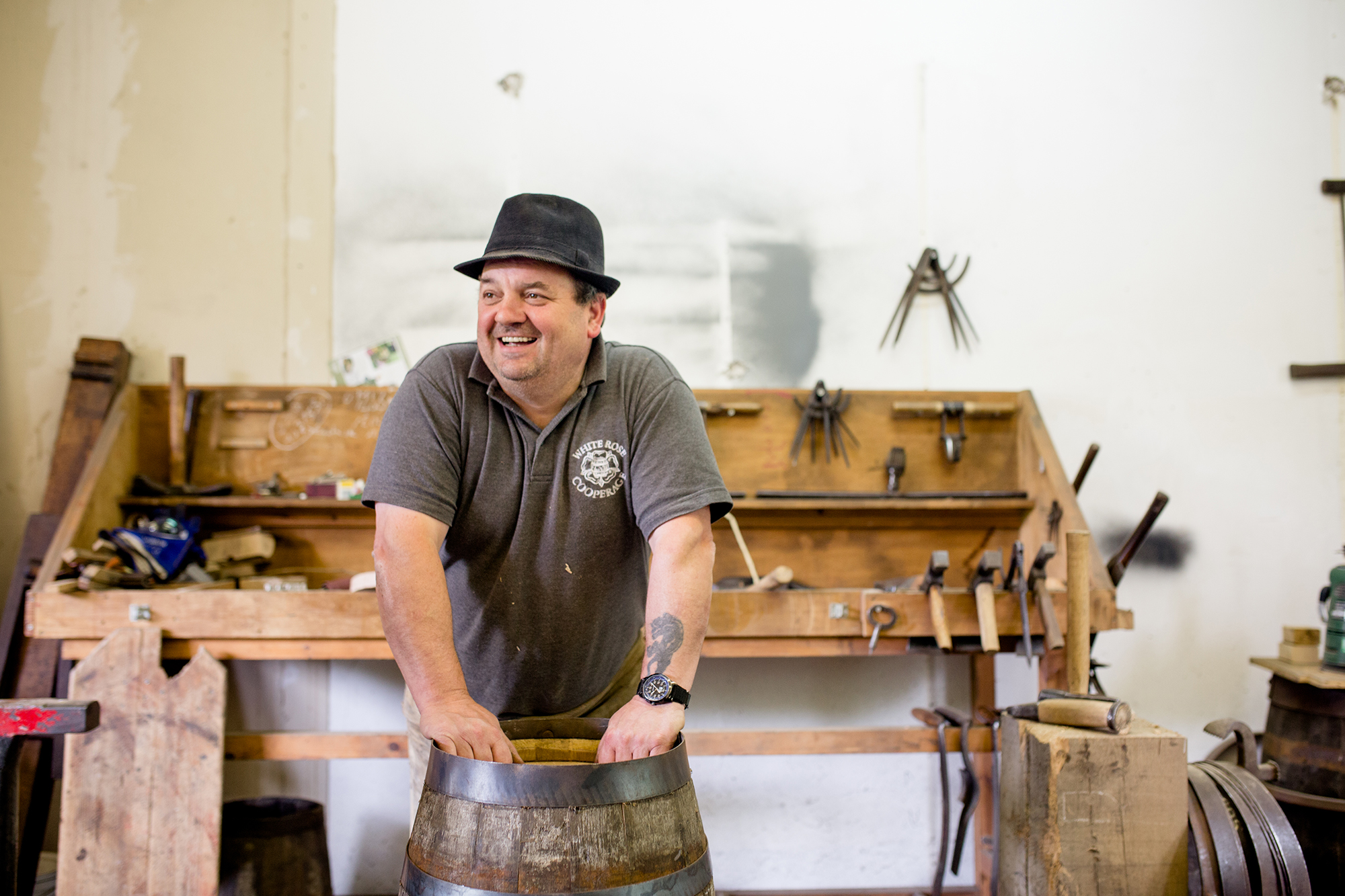 Theakston’s then-master brewer, Clive Hollis, took him on as an apprentice at the tender age of sixteen in his home town.  Warming to his subject, Simms delights in telling the story of how, as a young man working a summer job in the brewery, he was caught sneakily watching his master go about the process of dressing the staves.  With that, the teenager was put to task as Mr Hollis went for a beer.  Upon his return, the Theakston man found his future apprentice had completed all the barrels in the cooperage, “he ran his hand round it and said, ‘Not perfect but I bet you’ve done this before’, I said ‘no, first time.’  What I didn’t realise was he meant I’d been here before as a cooper,” Simms remembers, admitting there are things he knows about the job which he doesn’t know how he knows them.
‍
Back to this lifetime and Simms soon found himself very busy once he was taken on as the cooper’s apprentice, even if he was made clear about his place at the brewery: “I had to call him Mr Hollis because I didn’t drink when I first started, I wouldn’t go to pub on dinner time cause I was told when I started ‘under no circumstances do you drink’,” Simms tells us before launching into more anecdotes about ‘doing his time’ at the North Yorkshire brewery, the hard work and the seemingly harder drinking. I consider the tales about going to the pub at lunchtime and having a tea mug of beer on the cooperage workbench whilst fixing up a firkin or a hogshead – isn’t this all precision work? Surely drinking on the job is not conducive to engineering finely crafted beer barrels? “No it’s all designed to be done absolutely pissed out of your head! ‘Can’t do it when you’re sober.” That laugh again.
— No it’s all designed to be done absolutely pissed out of your head! ‘Can’t do it when you’re sober. 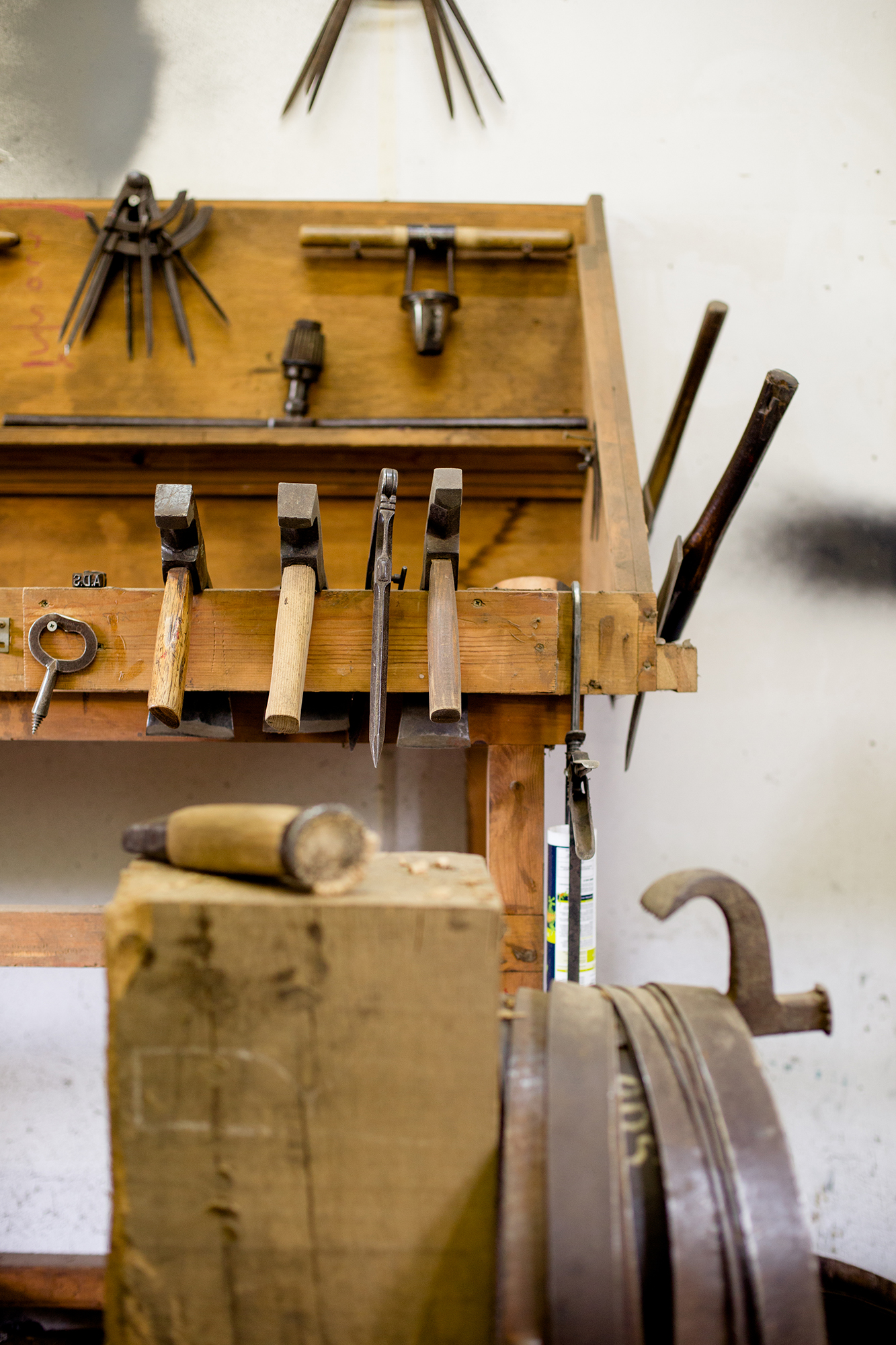 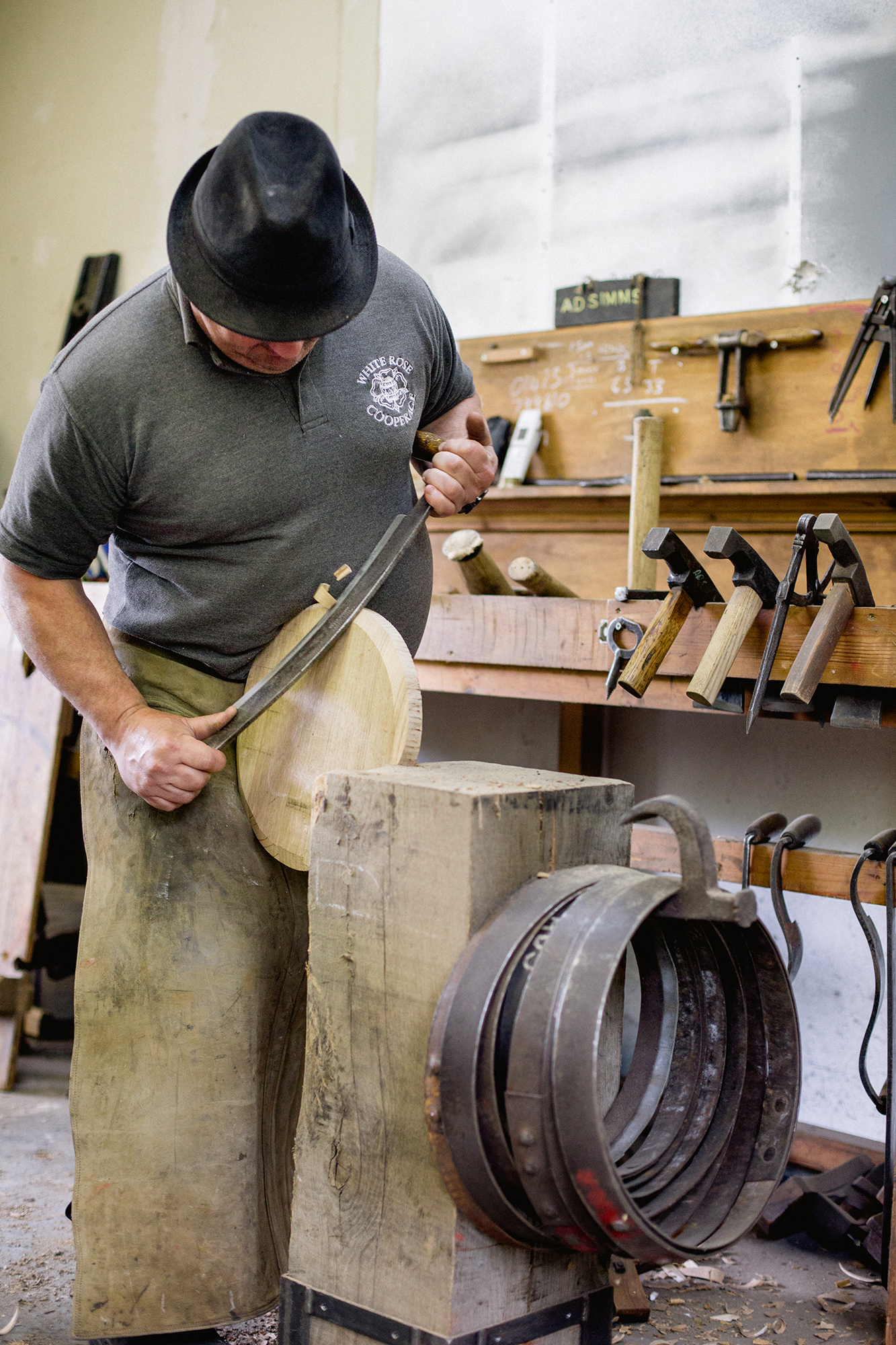 From Theakstons, Simms moved south to Wadworth Brewery in Devizes, Wiltshire.  There, he developed his skill which originated in an interest in wood and desire to become a carpenter.  At Wadworth, Simms learned about all aspects of the beer industry.  From going out on deliveries (but not with the brewery’s famous cart horses – he’s allergic) to trying out brewing on the micro brewery.  However, frustration grew as Simms wanted to get the most out of his skill and constant enquiries from other breweries and distilleries which he wasn’t able to deal with as a brewery cooper.
‍
After eighteen years in Wiltshire (“was only meant to be three!”), Alastair Simms returned to Yorkshire to open up his own commercial cooperage.  It was a risky move but one which is paying off.  Paying off so much that last year White Rose Cooperage found it needed at least one more pair of hands.  What ensued was a viral campaign to find an apprentice.  The One Show, ITV News, The Telegraph and many more media outlets covered the story of the ‘last master cooper’s search for an apprentice’.  Clearly bridging the gap of such an arcane craft with a new generation caught the nation’s imagination.  Unsurprisingly, it also resulted in a deluge of applications from all corners of the world. 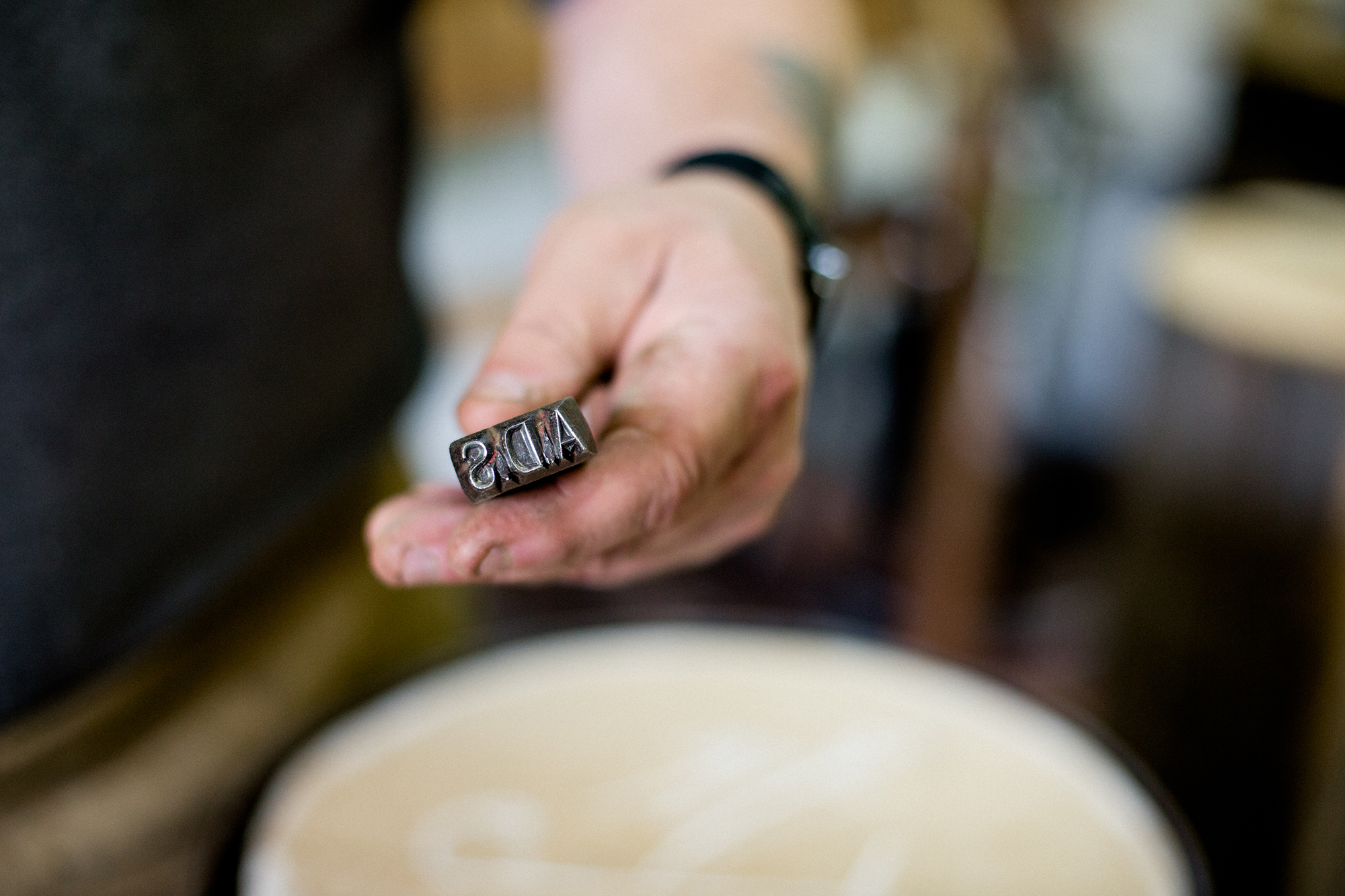 The media campaign was a necessary element to the search as before that, Simms was struggling to find anyone looking to enter the profession.  When both Simms and his newly appointed apprentice both admit even they didn’t know what a cooper was before entering the trade, it is unsurprising that it took the likes of Vanessa Feltz on BBC Radio to paint a picture for the general public.  Once the applications were in, the hard work started for Simms.
‍
After a rigorous testing process designed to establish who out of the aspiring cask creators were suited to the hard physical work of a cooper, and who Simms could also work in close proximity to for long hours (and vice versa), it came down to two applicants.  The master cooper agonised about the decision of choosing between an applicant who appeared to have all the attributes plus some experience with wood and another who was a little more ‘raw’.  He sought counsel with a neighbour on Thorpe Arch Estate, who told Simms to stop using his head and go with his heart. 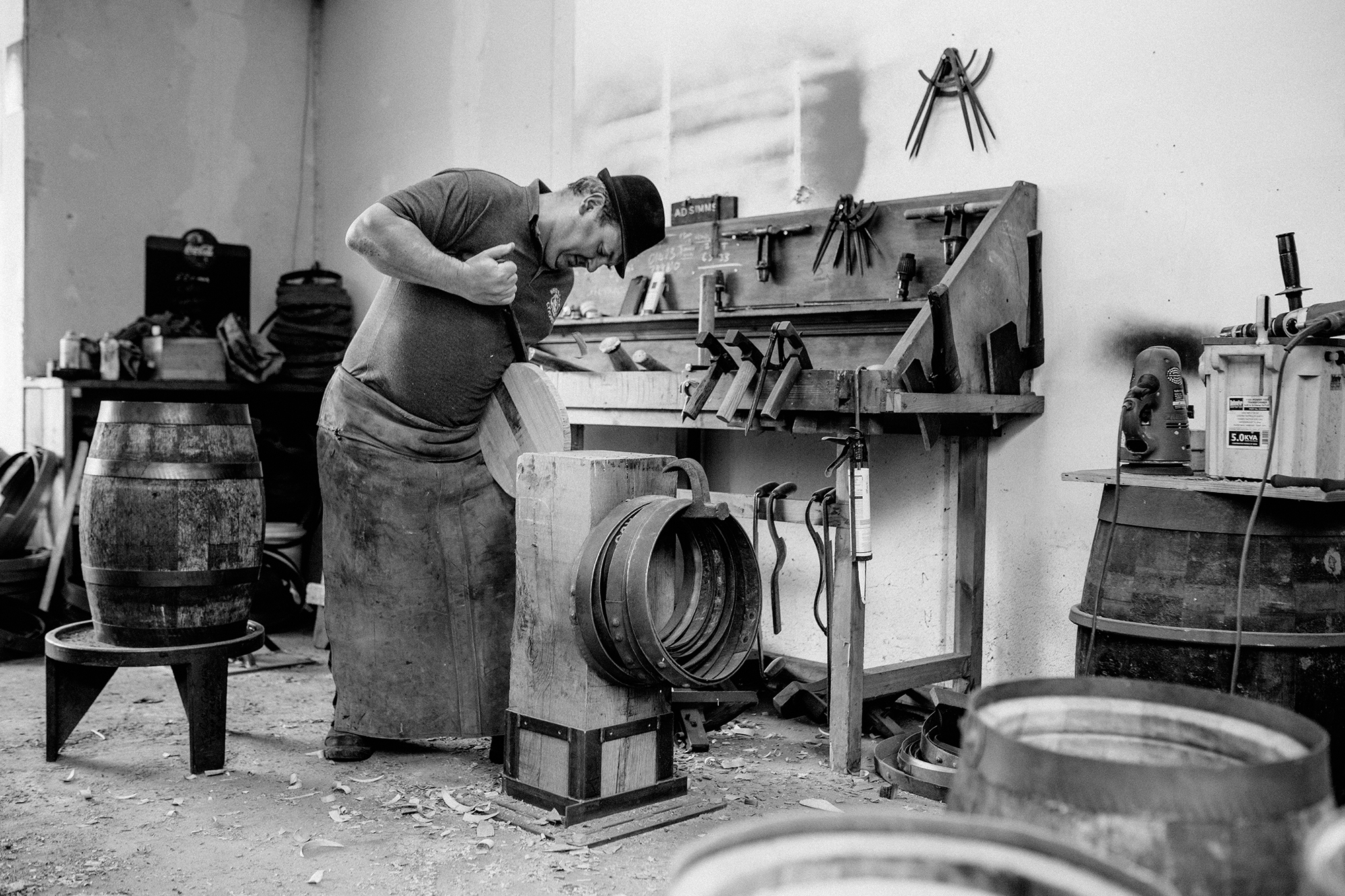 — With his leather apron and trilby on, Simms is someone who puts great stock in upholding the traditions of his trade, but as the multimedia search for an apprentice shows, he is also not afraid to take his business into the 21st century.
“Everyone knows how good the first sip of beer tastes after a long day at work. It’s the same after running, or any physical activity really,” Jon says. “A post-run shower beer might even be one of the greatest things life can offer you.”

But this group isn’t content to settle for mass-produced lagers in that adrenaline-rich moment.  Like any appreciator of good beer, they feel it has to be something worth drinking.  They speak with great fondness of Beavertown’s Gamma Ray pale ale for example – a beer that indicates to the group “a pub that’s probably worth going to.”  One of the group, James Brewster, is even named after a brewery; somehow acquiring the nickname “BrewDog” although they won’t tell me how this came to pass...
‍
“Actually, they’re named after him,” Leo quips.
‍
“Howling Hops in Hackney Wick is another favourite haunt of ours,” Jon interrupts.  “We love drinking anything from them, usually escalating towards something ridiculous towards the end of the night.”
‍
After our collective efforts in Victoria Park, it’s only a short hop over the A12 footbridge into Hackney Wick and all the fabulous beer locations it offers, from group favourite Howling Hops to the Beer Merchants tap.  However, on this occasion, it’s copious amounts of pizza that the runners require for their recovery, and so we head towards the Crate Brewery taproom to grab a few pints of IPA.
Article taken from