Volume 03
Craig Ballinger
Words
Chris Chudleigh
Photography
The bar stool rocks, maybe it’s broken.  But the pub’s busy so it can’t be swapped, and the place by the hand pumps is prime territory for keeping an eye on the selection.  The glass is still half full and the room wraps around your shoulders like a warm blanket.  The noise of other people’s voices has blurred to a background fuzz and you can’t remember where you were up to in that conversation with Skateboard Pete.  You’re pissed down the pub again, but it’s not your fault; the beers are just too delicious.
‍
It’s long been a problem for me that most of my favourite beverages have an ABV.  I don’t really like juice or soft drinks, yet I’m very keen on whisky and wine and beer.  Other than tea and water, if I’m consuming liquids they’ll probably contain booze.  In these times of rampant creation and innovation, it’s difficult for the perpetually thirsty Epicurean to stay steady.  Faced with barrel-aged barley wines, imperious stouts and double dubbels, it’s easy to eschew session-strength beers and get right into testing the strength of the bar stool.
‍
Given this new trouble I’ve made a point of trying to stretch out a period in the pub by getting involved with the bar snacks.  Essentially, your body will process alcohol much slower if you introduce food into the mix.  Your stomach needs to hold onto solid matter for longer so it closes off the valve into the gut.  Whilst the stomach does its work, the progress of the boozy liquids is halted and so we process everything slightly slower.  The issue is that most bar snacks, for me, are terrible - both in taste and quality. 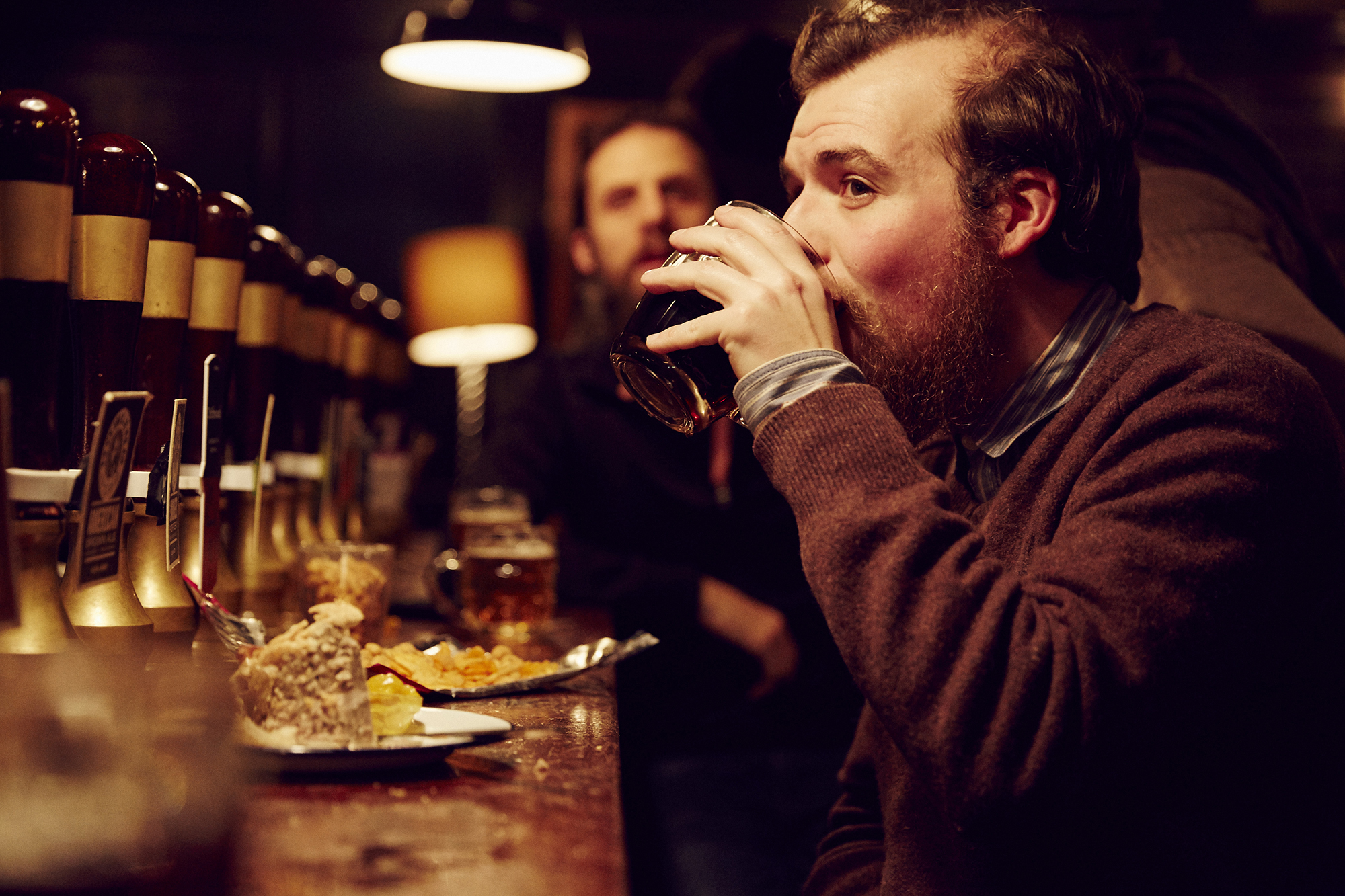 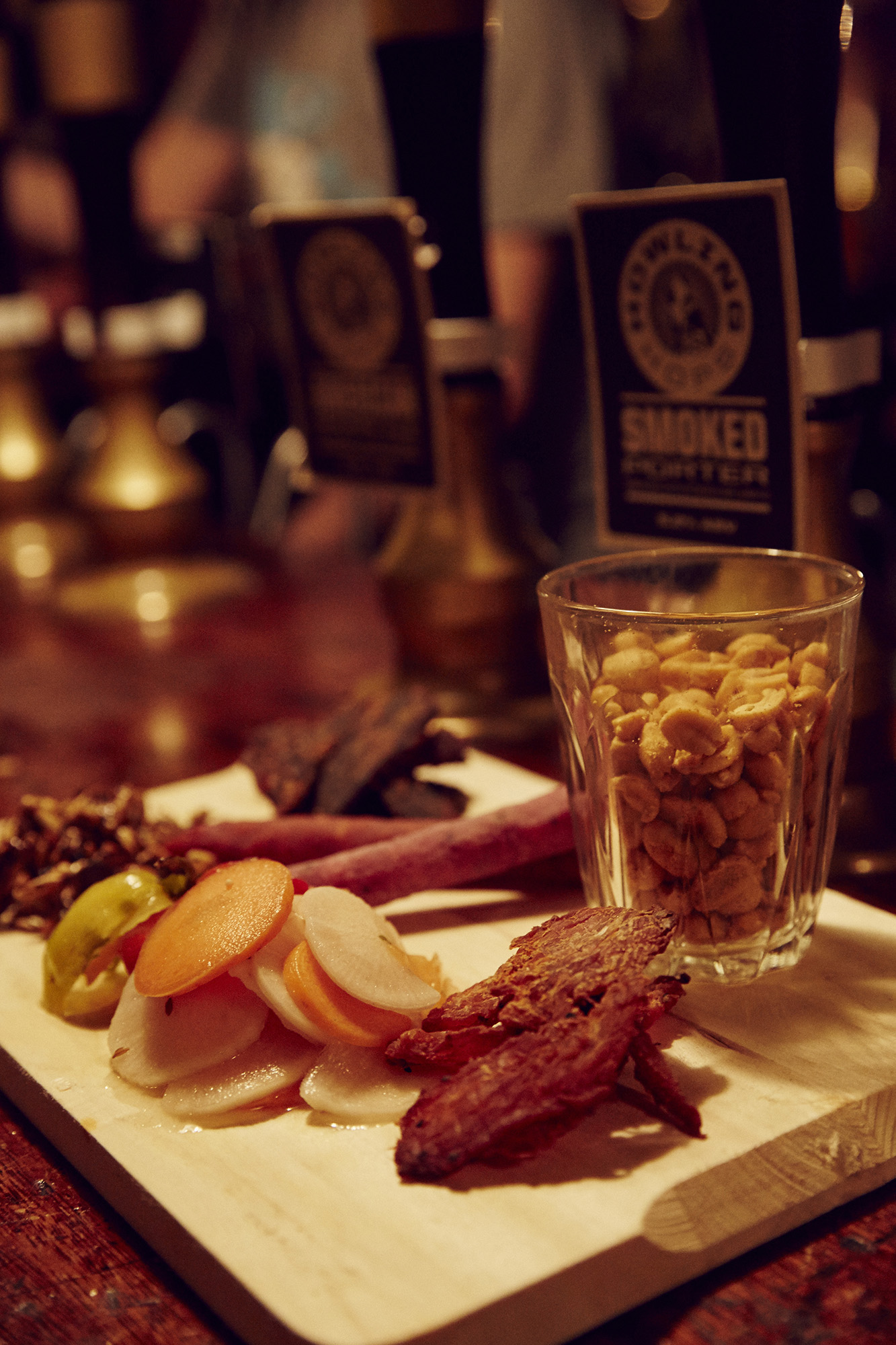 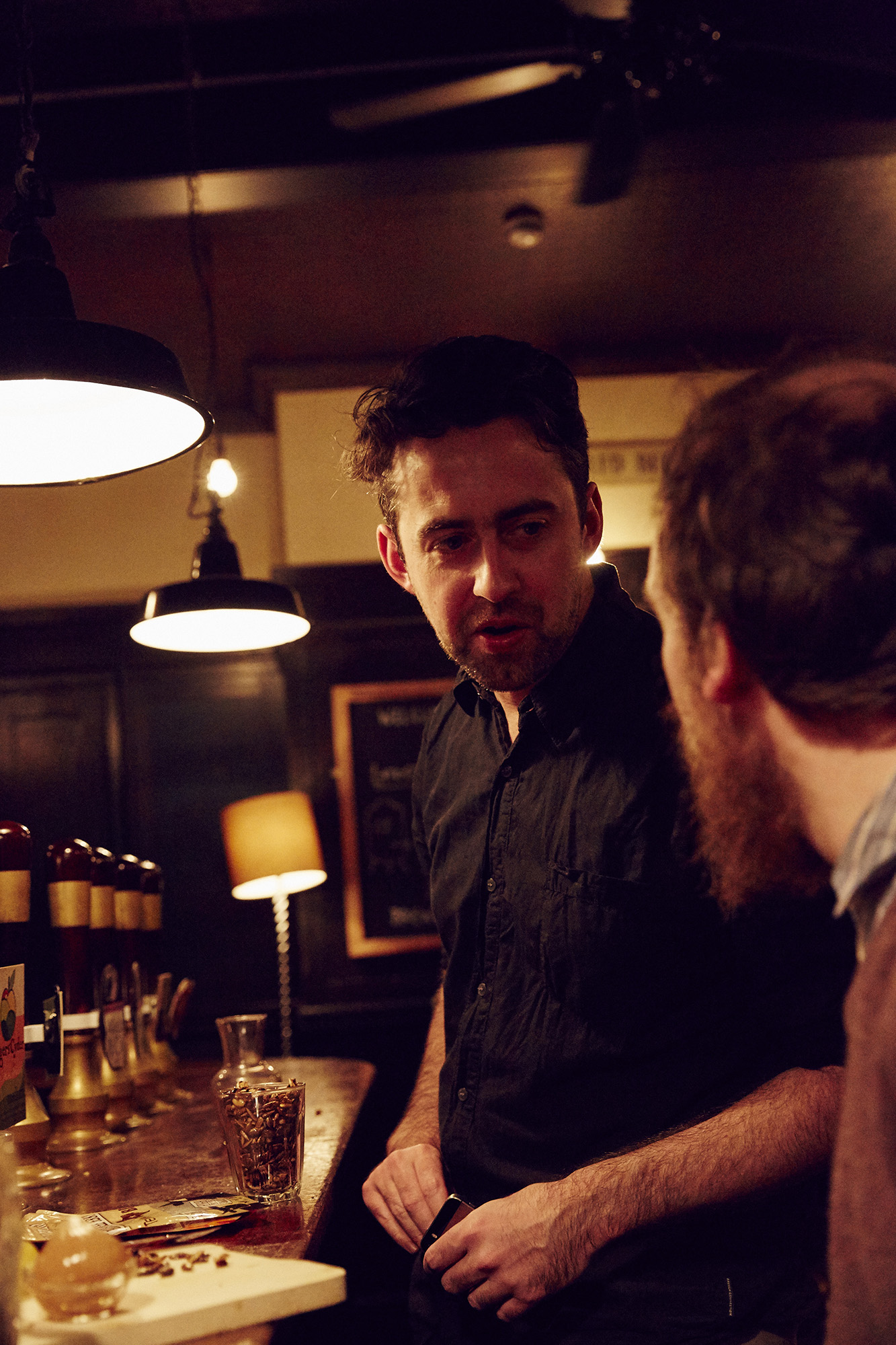 Last autumn I took my passion for drinking and snacking to the Independent Manchester Beer Convention (Indy Man Beer Con or IMBC if it’s eating into your drinking time).  There I set up a stall under the guise of We Eat, my faux food business, to sell the finest bar snacks I could find to the drinkers of some of the best beer in the world.  I curated a menu from a selection of local producers that would complement a good beer and add that extra layer of excitement that can go overlooked at beer festivals in general.

My fellow Mancunians understood what I was getting at and took all they could off my hands.  They snacked on beer sticks, jerky, nuts, seeds, pickles and pork scratchings whilst getting wonky in the grand surrounds of Manchester’s Victoria Baths.  I did my best to remember to sell the products rather than force them on people, but I’ll never be a business man.  I’ll also never knowingly trade in trash.

To relive the festival and try to put my finger on what is truly great about bar snacks, I headed to my favourite boozer for a taste test with the locals. Mixing the feeling of a traditional pub with a modern array of beer, The Cock Tavern, on Hackney’s Mare Street, is the ideal place to expand your palette and foster a gentle buzz. Beneath the floorboards, The Cock has its own little brewery, Howling Hops, which produces the majority of the cask ales on offer. I got a pint of their Smoked Porter and began to order snacks. If you prop up the bar enough in a place, you get comfortable with looking like a local weirdo. I’ve found there’s nothing more comforting than an afternoon talking left-wing politics with Dan the Cockney barman and hearing tales of big cat sightings from John the Poacher. 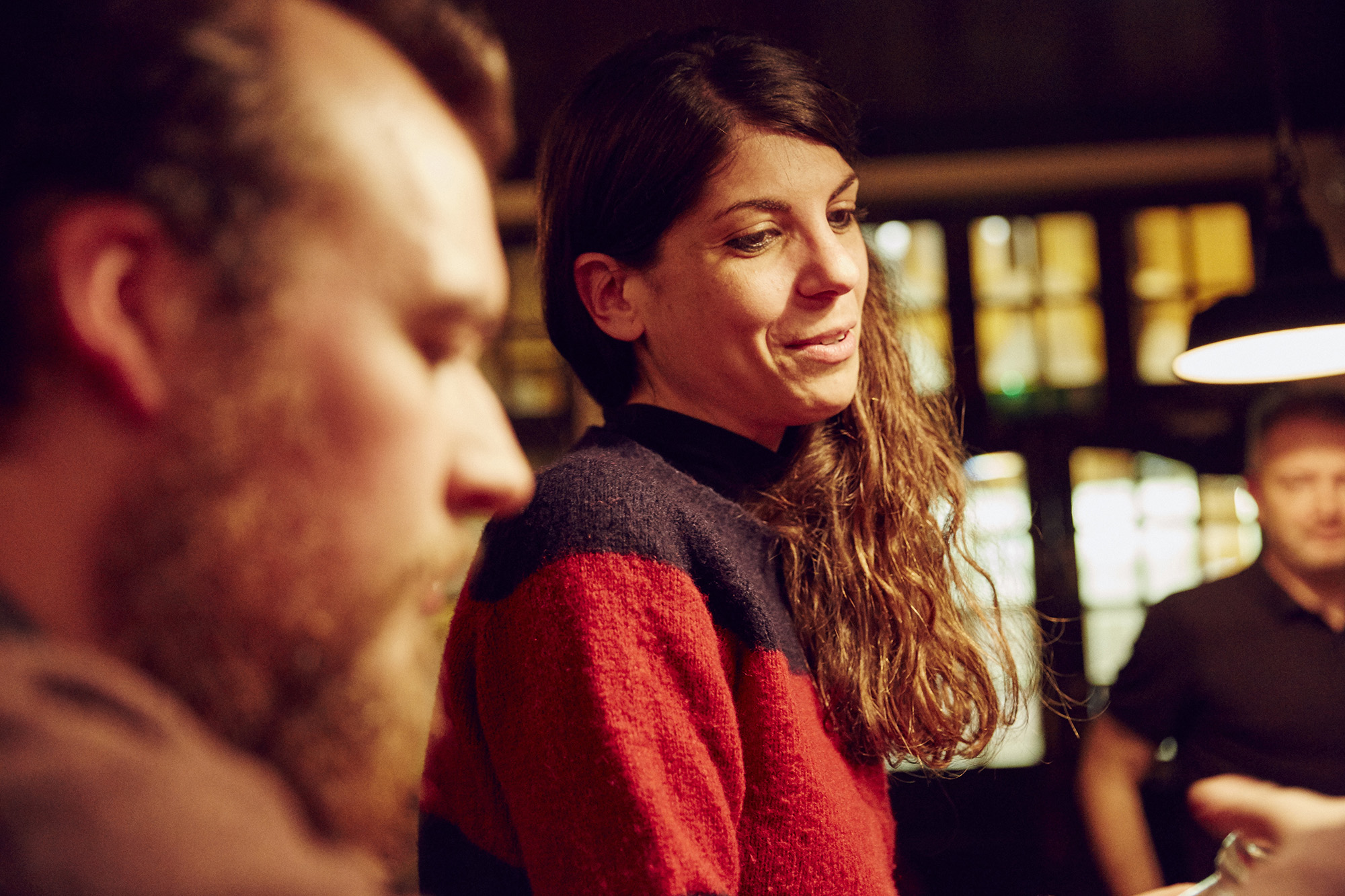 — If you prop up the bar enough in a place, you get comfortable with looking like a local weirdo. I’ve found there’s nothing more comforting than an afternoon talking left-wing politics with Dan the Cockney barman and hearing tales of big cat sightings from John the Poacher.
All of this in mind, I loosened up with a classic Wigan Buffet, exploring the combination of chilli peanuts and prawn cocktail Seabrook crisps.  The chilli and sugar worked well, and the textures were as pleasing as ever.  I slid the packet to the guys on the stools next to me - a bicycle messenger and a dude really into open-mouth smiling.  It must’ve been their first time, maybe they’d never been up North.  They delighted in the offerings and I got a pork pie in.  The pies in The Cock are ideal; they tick the two requisite boxes - coarse well-seasoned pork and crunchy dark-baked pastry.  Only the gluey piccalilli really lets it down.  Fortunately I’d packed well, having been to see some of my favourite local suppliers ahead of my odyssey of bar snacks.
‍
Nick Vadasz is one of Hackney’s many masters of fermentation, but unlike his neighbours, Nick’s speciality lies in the fermentation of vegetables, not hops and grains.  Like a lot of London’s small breweries, the Vadasz Deli production unit is nestled under a converted railway arch.  On approach however, you get hit with a powerful lactic tang rather than the pungent fragrance of hops.  Nick is friendly, welcoming and knows his stuff.  The fact that I’ve been most taken by is that pickles are actually good for our livers.  Vadasz products are unpasteurised and contain live probiotic cultures that are great for digestion and can help our poor beer-soaked organs. 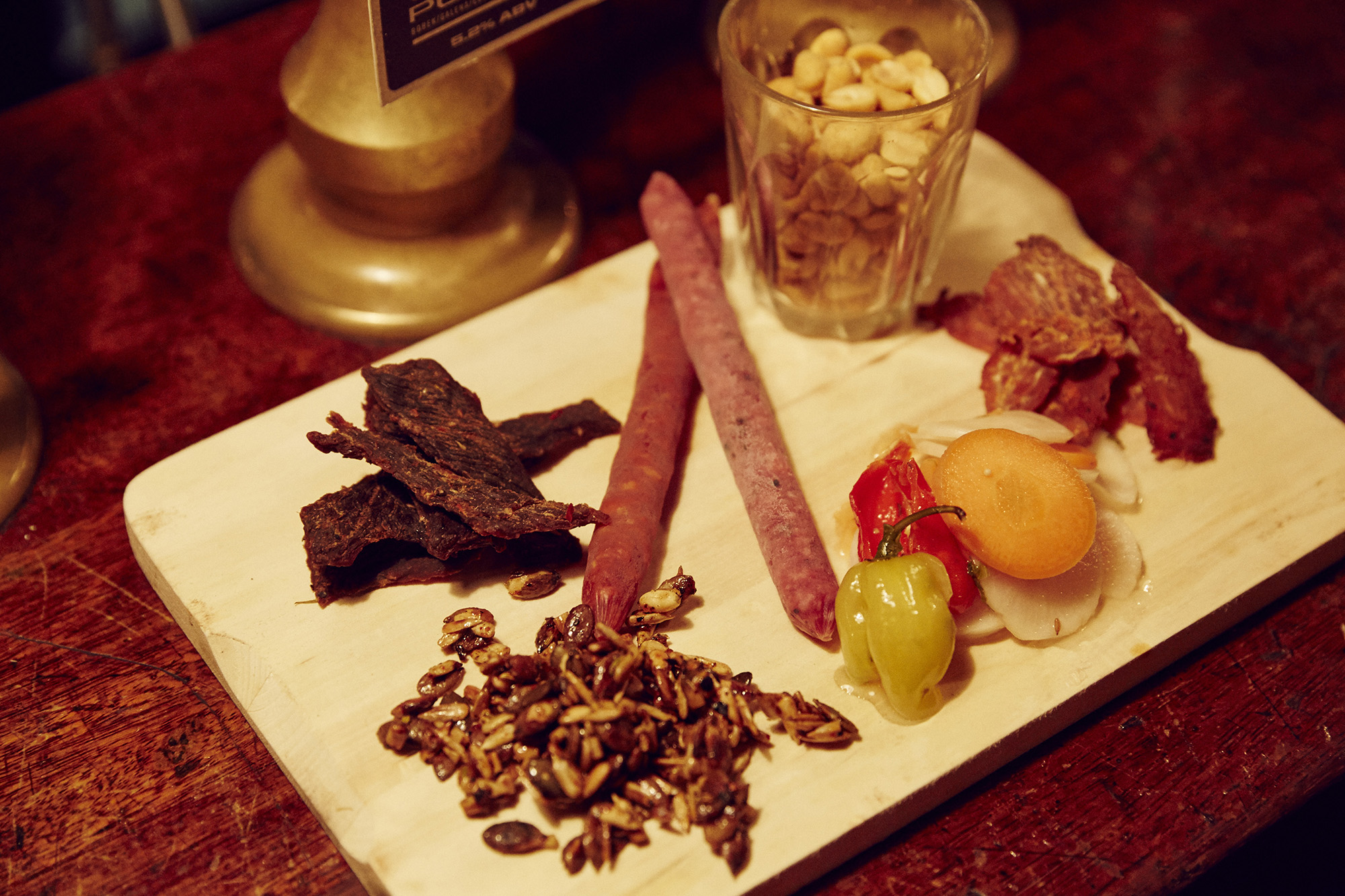 Whilst pickled onions and the divisive, pickled eggs are pub classics, I’ve seen little on offer to update this part of the bar menu, which is why it’s pioneers like Nick that can really help.  Of the array of wonderful krauts, kimchis and pickles, it’s Nick’s hot pickled roots that are the standout choice for a bar snack.  Rounds of carrot and mooli radish are fermented with scotch bonnet chillies, to create crunchy pickles that are both sweet and sour, with a lovely fruity bite.  I put a tub on the bar and saw people’s eyes swivel.  They look beautiful, but it wasn’t long before patrons and bar staff alike were taking longer pulls on their pints and gaining a slight gloss of sweat.

Palettes cleansed and awoken, it was time for some umami action.  I ordered in some beer sticks from the bar.  The Cock stocks Serious Pig salamis which are delicious, especially the chilli and paprika effort.  To IMBC I also took beer sticks from Moon’s Green, a charcuterer from Northiam in East Sussex, and meats from Islington’s Cobble Lane.  These three producers are doing the finest work in this area and I’m thankful for their contribution.  A stick of spicy or smoky pork is the ideal accompaniment to a beer, and ergonomic too.  Aside from these guys, the usual problems persist - industrially-produced products are intrinsically low in genuine quality as their focus is on uniformity, consistency and keeping costs down.

Cobble Lane Cured are making some of the finest meat products around including, importantly, jerky and beer sticks.  Despite their frequent comparison to the Peperami, beer sticks are perhaps my favourite of all bar snacks.  It’s true that it’s a slender spiced sausage, but the comparisons end there.  Cobble Lane’s beer sticks are made in Polish kabanos style, smoky and rich, but lean and with a delicate crunch.  Seek them out alongside a pint of something dark.
‍
Once I got moving on the meat, I really roused interest at the bar, so it was time to give the people something to chew on. Most commercially-made jerky is horrible stuff. Weird and plastic-like, the shiny, sugary squares of Wild West Beef Jerky will eventually break down and leave behind a vague meaty flavour that’s satisfying if you’ve never really eaten before. The main problem, as pointed out to me by Cobble Lane Cured’s Matt Hill, is that most jerky available is produced in the same factory in Scotland. The Jerky Group produce most of the jerky and biltong products found in shops and supermarkets, including the bizarre Men’s Health branded jerky, and M&S own-brand. 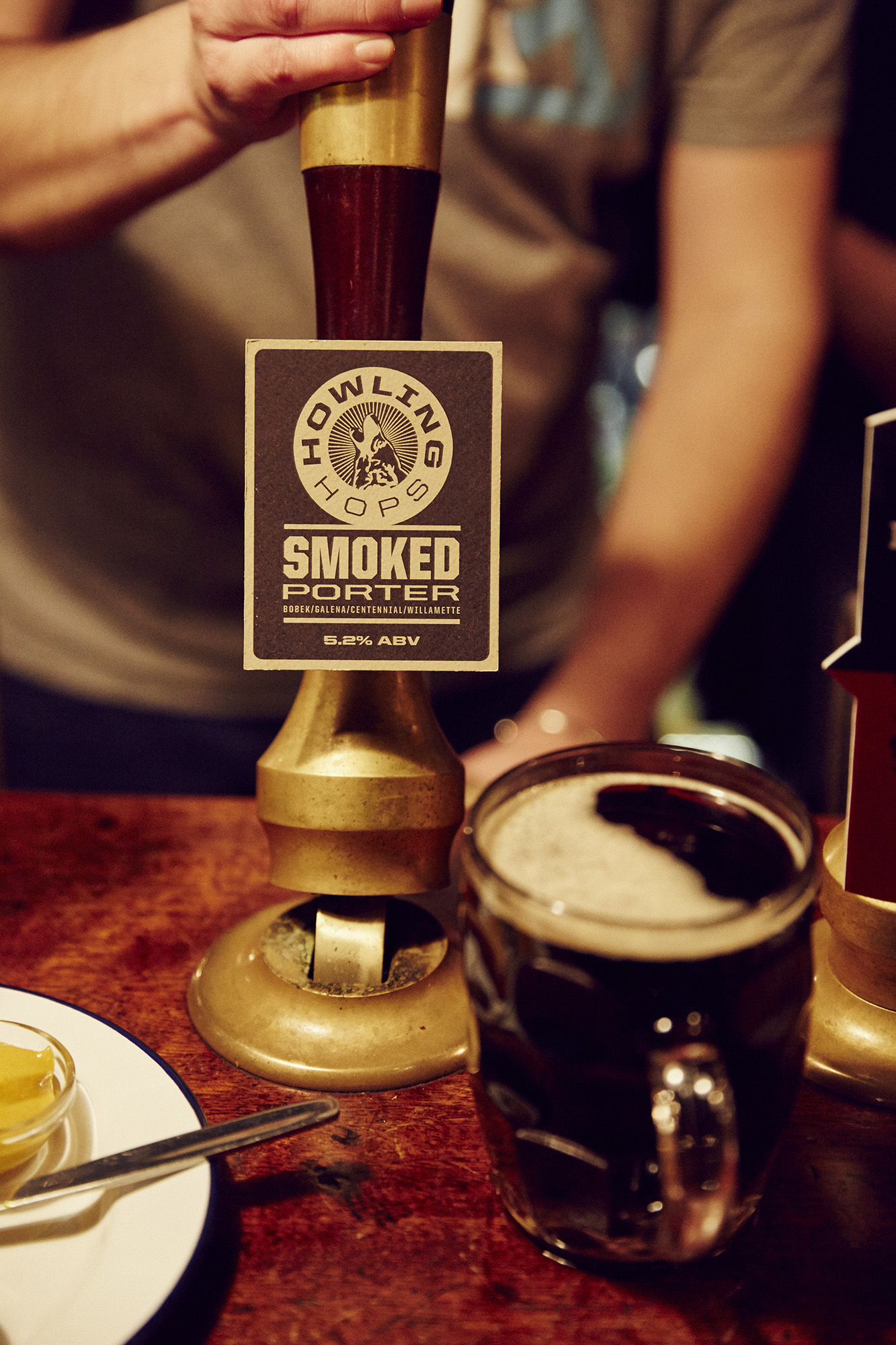 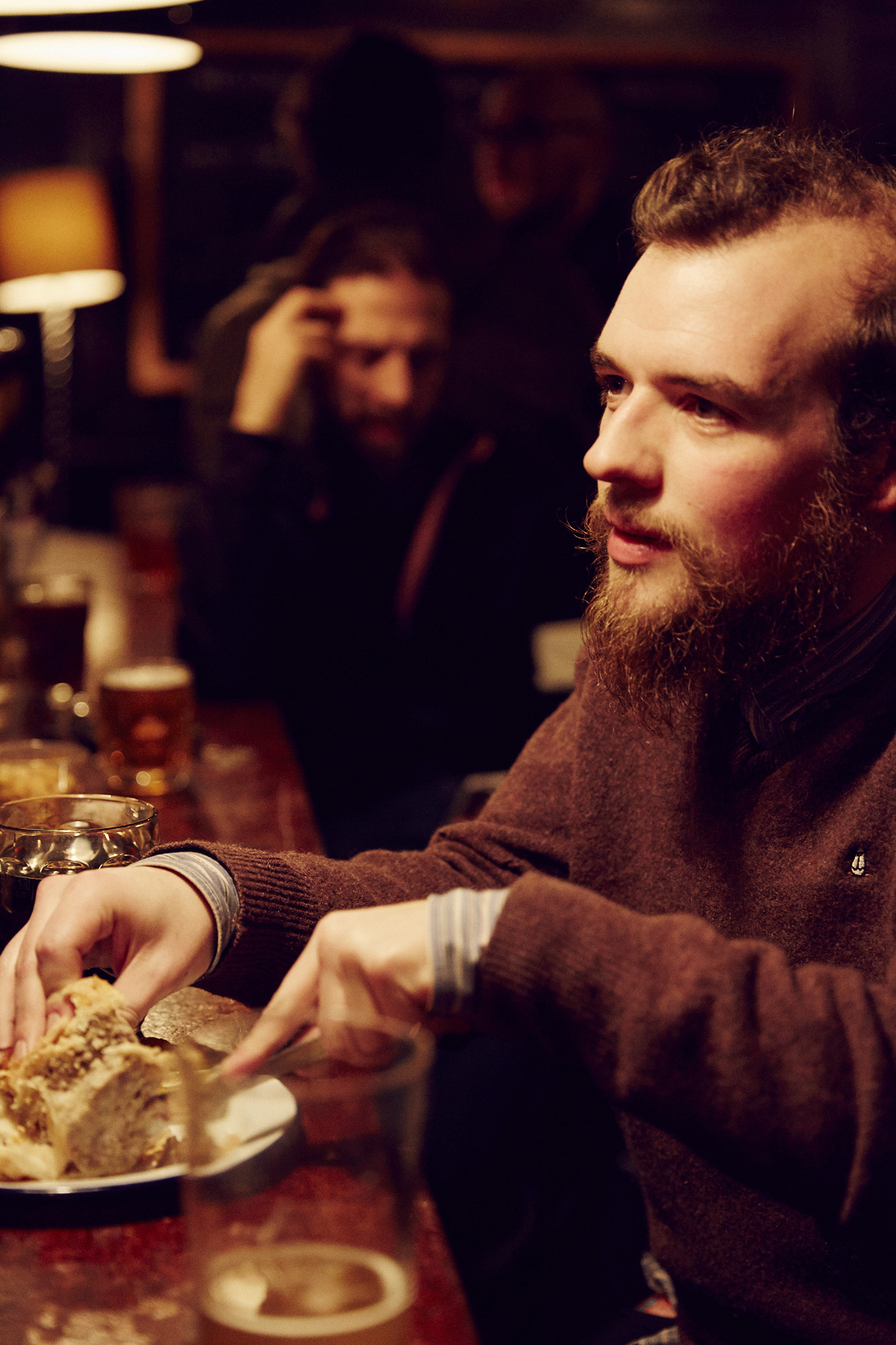 My stock for the evening was from Hackney Wick-based Billy Frank’s.  Founder Will Yates is producing fine jerky in an array of flavours.  If you’re swilling a nice session ale, and don’t mind some mild face sweating, I’d recommend finding some of their jerky flavoured with Holy Fuck hot sauce (made by the infamous East London street food trader Mark ‘The Ribman’ Gevaux).  You’ll need a lot of liquids to hand, but the fruity chilli flavour with the rich dried beef is hard to resist; Billy Frank’s is traditional jerky done well, with an aggressive twist.
‍
Having spent ten years in the US, most of that in Texas, Will is well-educated on dried beef.  He started making his own about three and a half years ago due to the state of the stuff available.  Will told me that he “got tired of buying shit that was expensive and not as healthy as it should be,” so set about making something distinctive, that would be quite different from the factory produced stuff.  I asked what makes it stand out and got the obvious answers – “the ingredients, especially the high quality grass-fed British beef, which is the same used in many Michelin-starred restaurants, and the method of artisan production.”  This all results in something delicious that is also high in protein, and low in carbs, salt and sugar.  With all of the basics nailed down, Will has gone on to get weird with flavours – fajita and cheeseburger amongst his favourite creations. 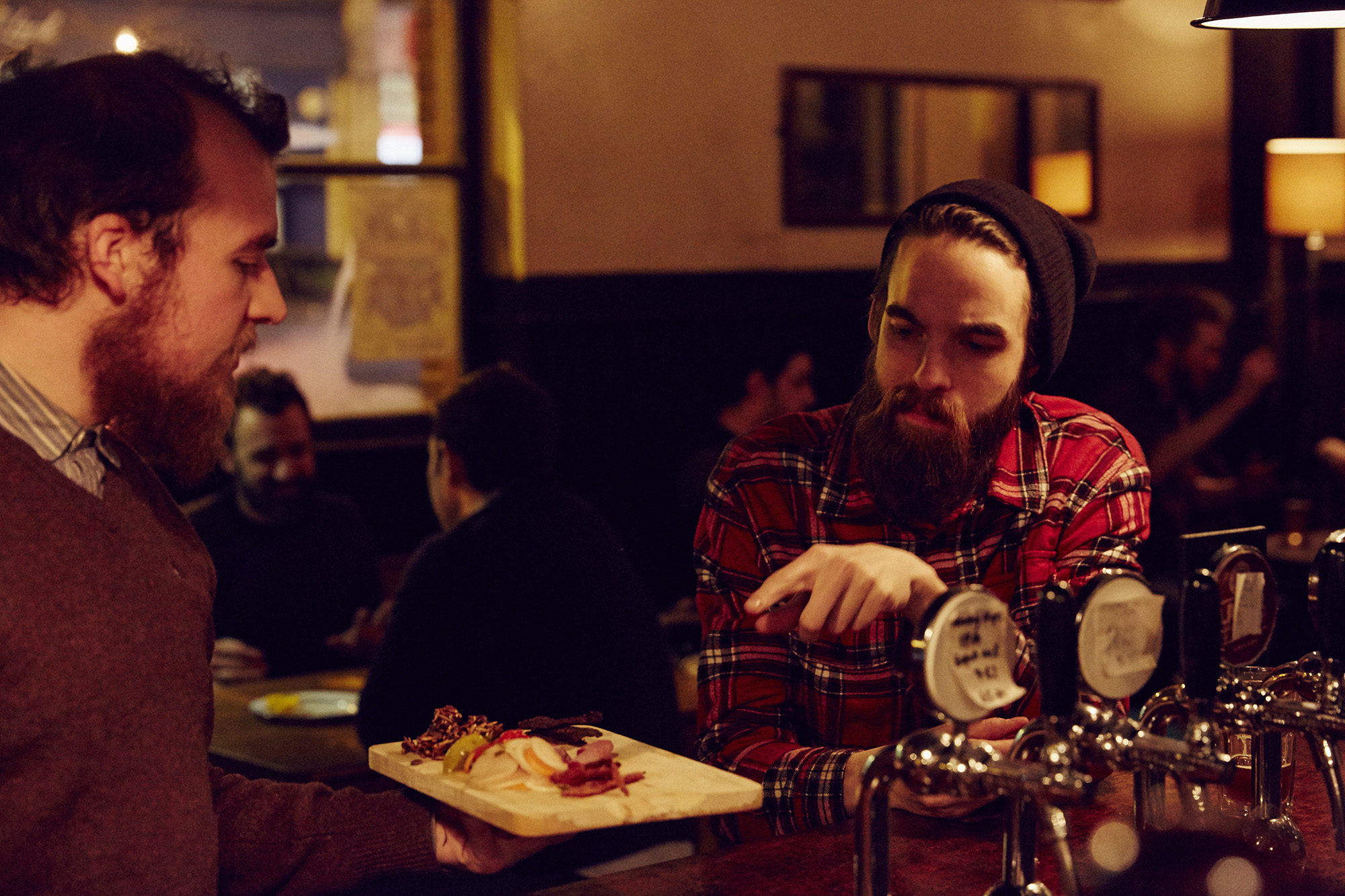 The Holy Fuck hot sauce featured in Billy Frank’s jerky is actually one of the most widely used flavours in the world of London bar snacks.  It features in scotch eggs, sausage rolls and as a glaze for nuts.  For IMBC I roasted cashews and almonds then glazed them in this fearsome sauce to make something close to bar snack perfection.  To cut the heat, I once came up with the idea of sweetened seeds to take the edge off.  More recently I tweaked the seed recipe to create a stand-alone snack, something I thought would compliment any beer at any time – clusters of pumpkin and sunflower seeds bound together with barley malt syrup and seasoned with Turkish chilli, smoked paprika and fennel seeds.
‍
I took a jar of these creations out and placed it on the bar.  It wasn’t too long before I was surprised to find that somebody wanted to buy a portion.  My jar matched those that housed the nuts behind the bar and one lady assumed they were on the menu.  I could hardly turn her down and it was nice to find that reactions were generally very good from the weekday boozers.  Earlier, I’d taken my clusters for a taste test at Pressure Drop’s brewery.  I found the brewers having a lunch break, sat on pallets and chairs in the middle of the brewery silently contemplating bowls of soup.  After discussing new beers and future plans, I handed a jar of the clusters to head brewer Graham O’Brien, who remarked; “This is exactly the kind of snack you need when you’re brewing, being around the malt all day. Slow release energy too.”  This is something I’d not considered, that the brewers need snacks too.  If they’ve not got the energy to make the beer, we’re all doomed to sobriety.